Refer to the exhibit. What statement describes the DR/BDR relationship of the HQ router?

HQ is the BDR.

HQ is a member of an NBMA network.

A DR is not elected.

The OSPF priority value determines the active DR on the Frame Relay link.

The link types are identified as broadcast multiaccess.

The BDR will have a router ID whose value is greater than the DR router ID. 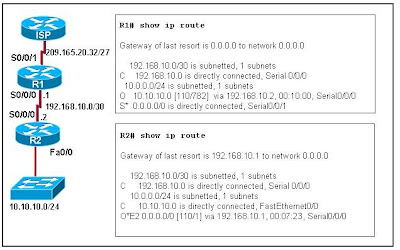 Refer to the exhibit. How was the OSPF default gateway entry for R2 determined?

Default routes are automatically injected by OSPF into all advertisements.

A static default gateway route is defined in the configuration of R2.

The default-information originate command is applied on R1.

The ISP defines the gateway of last resort and automatically passes it to R1 and R2.

The ip default-gateway command is applied on R2.

4
What is always required for OSPF routers to share routing information? 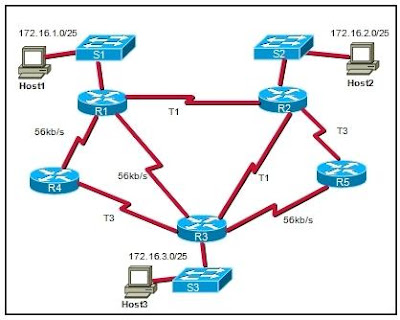 Refer to the exhibit. A network administrator has implemented OSPF and the network has converged. If all router interfaces are enabled and functional, what route will OSPF view as lowest cost when moving frames from Host3 to Host1? 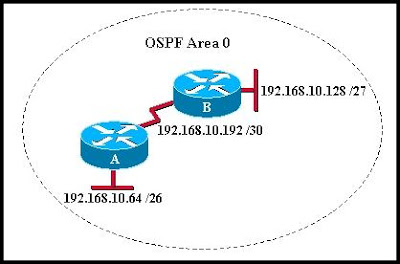 Refer to the exhibit. Which commands configure router A for OSPF? 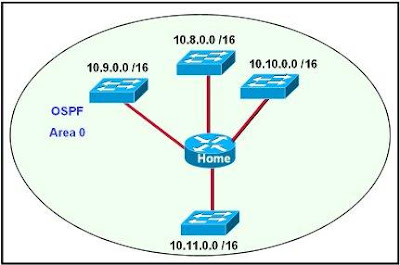 Refer to the exhibit. Which network statement configures the home router to allow all the interfaces to participate in OSPF?

8
Which statement is true regarding OSPF DR and BDR elections?

A new DR/BDR election occurs each time a new OSPF neighbor is added.

The router with the highest OSPF priority setting wins the election for DR.

The default priority value for a router connected to a multi-access network is 0.

The router with the highest MAC address is elected as the DR when the default priority values are used.

Refer to the exhibit. The network administrator would like only the 172.16.32.0 network advertised to Router1. Which OSPF network command accomplishes this?

All routers in the same area have identical link-state databases when converged.

Calculating the shortest path for each destination is accomplished with the SPF algorithm. 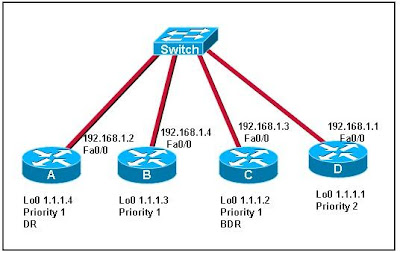 Refer to the exhibit. Routers A, B, and C are part of the existing OSPF network. Router D has been added to the network. All routers are running OSPF and have the indicated priorities applied to the interface. What is the DR/BDR status immediately after router D is added to the existing network?

An election is forced and router D wins the DR election.

The DR and BDR do not change until the next election.

An election is forced and the existing BDR becomes the DR.

The router with the highest router ID becomes the new BDR.

12
Which two statements describe the use of OSPF DR/BDR elections? (Choose two.)

Elections are required in all WAN networks.

Elections are required in point-to-point networks. 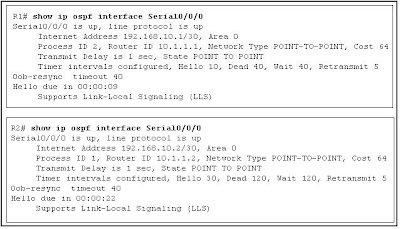 Refer to the exhibit. As part of an OSPF network, R1 and R2 are trying to become adjacent neighbors. Although it appears that the two systems are communicating, neither of the routing tables include OSPF routes received from its neighbor. What could be responsible for this situation?

R1 and R2 are not on the same subnet.

The Process IDs on each router do not match.

The timer intervals on the routers do not match.

The value set for the Transmit Delay time on both routers is too low.

Refer to the exhibit. What is the purpose of the value 128 shown in bold?

It is the OSPF cost metric.

It is the OSPF administrative distance.

It is the value assigned by the Dijkstra algorithm that designates the distance in hops to the network.

It is the value assigned to an interface that is used by the DUAL algorithm to determine the metric. 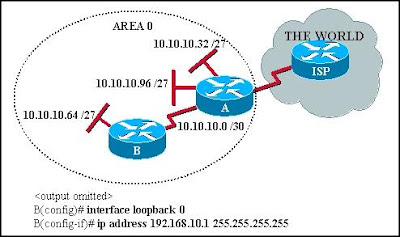 Refer to the exhibit. What is the purpose of the configuration commands added on router B?

allows router A to form an adjacency with router B

provides a stable OSPF router ID on router B

creates the OSPF adjacency table on router B

The AD for static routes is lower than the AD for OSPF routes.

17
What is the primary difference between link-state protocols and distance vector protocols with regard to route calculation?

Link-state protocols calculate and pass full routing tables to all routers in their associated areas, and distance vector protocols do not.

Refer to the exhibit. When establishing adjacency relationships, which IP address would router A use to send hello packets to router B? 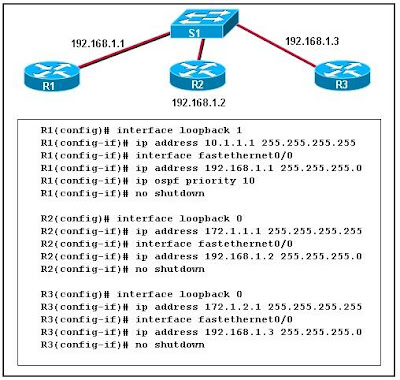 Refer to the exhibit. Which router will be elected the DR and which will become the BDR?


21
When compared to a distance vector routing protocol, what is a benefit of the hierarchical design approach that is used in large OSPF networks?

The topology database eliminates the need for a routing table.

Frequent periodic updates are sent to minimize the number of incorrect routes in the topological database.

Routers have direct knowledge of all links in the network and how they are connected.

After the initial LSA flooding, routers generally require less bandwidth to communicate changes in a topology.

23
If a network has converged, what is true about the link-state database held by each router in the same OSPF area?

Each router has a link-state database containing the same status information.

Each router has a different link-state database depending on its position within the network.

The link-state database is stored in a designated router and is accessed by each router in the area as needed.

The link-state database in each router only contains information about adjacent routers and the status of their links. 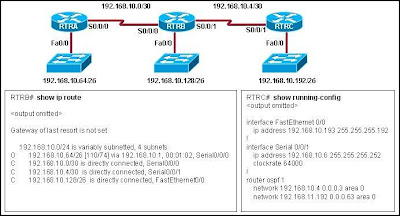 Refer to the exhibit. RTRC was recently configured and is not sending the proper OSPF routes to RTRB, as shown in the RTRB routing table. Based on the RTRC configuration, what is most likely the problem?

RTRC interfaces are administratively shut down.

The OSPF process ID for RTRC does not match the process ID used on RTRB.

The interface addresses on RTRC overlap with other addresses in the network.

The OSPF routing configuration on RTRC has a missing or incorrect network statement.