2. Given the following commands:
Router(config)# router rip
Router(config-router)# network 192.31.7.0
What three conclusions can be determined based on the commands used on the router? (Choose three.)
• A link-state routing protocol is used.
• A distance vector routing protocol is used.
• Routing updates broadcast every 30 seconds.
• Routing updates broadcast every 90 seconds.
• Hop count is the only metric used for route selection.
• Bandwidth, load, delay, and reliability are metrics used for route selection.


4. What two problems may occur if the EIGRP default bandwidth for a serial link is higher than the actual bandwidth? (Choose two.)
• Routing updates will arrive too quickly for receiving routers to process.
• The port IP address will be rejected by the routing protocol.
• Suboptimal paths will be selected.
• The port protocol will return to the HDLC default.
• VLSM support will be disabled.
• Network convergence may be affected. 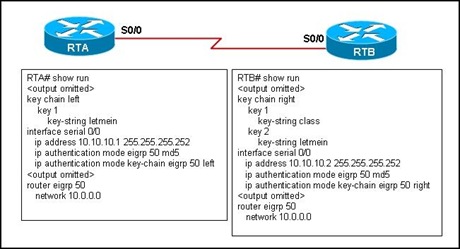 
8. Which Layer 4 protocol does EIGRP use to provide reliability for the transmission of routing information?
• DUAL
• IP
• PDM
• RTP
• TCP
• UDP


10. What prevents RIPv1 updates from being correctly advertised?
• an increase in network load
• the use of variable length subnet masks
• the use of multiple Layer 3 networks on the same router
• a variation in connection speeds on the links to a destination
• a mismatch between the configured bandwidth and the actual bandwidth of a link


20. What two statements are true regarding EIGRP tables? (Choose two.)
• A feasible successor route can be found in the topology table.
• A successor route can only be found in the routing table.
• The topology table shows whether a route is in the passive or active state.
• The routing table shows the amount of time elapsed since a router adjacency was formed.
• The neighbor table shows all adjacent Cisco devices.
• Administrative distance is shown as a column in the neighbor table.

Refer to the exhibit. Which statement is true about the output from the show ip protocols command?
• RIPv2 is configured on this router.
• Auto summarization has been disabled.
• The next routing update is due in 17 seconds.
• 192.168.16.1 is the address configured on the local router